Nenagh AFC Youths produced a dazzling performance to secure a first Joe Delaney Cup title for the Brickfields Club with a comprehensive 8-2 defeat of Peake Villa at the Newhill Park venue last Saturday afternoon, the NT&DL side led 2-1 at the break and outplayed their Thurles opponents in the second period netting six in the process. 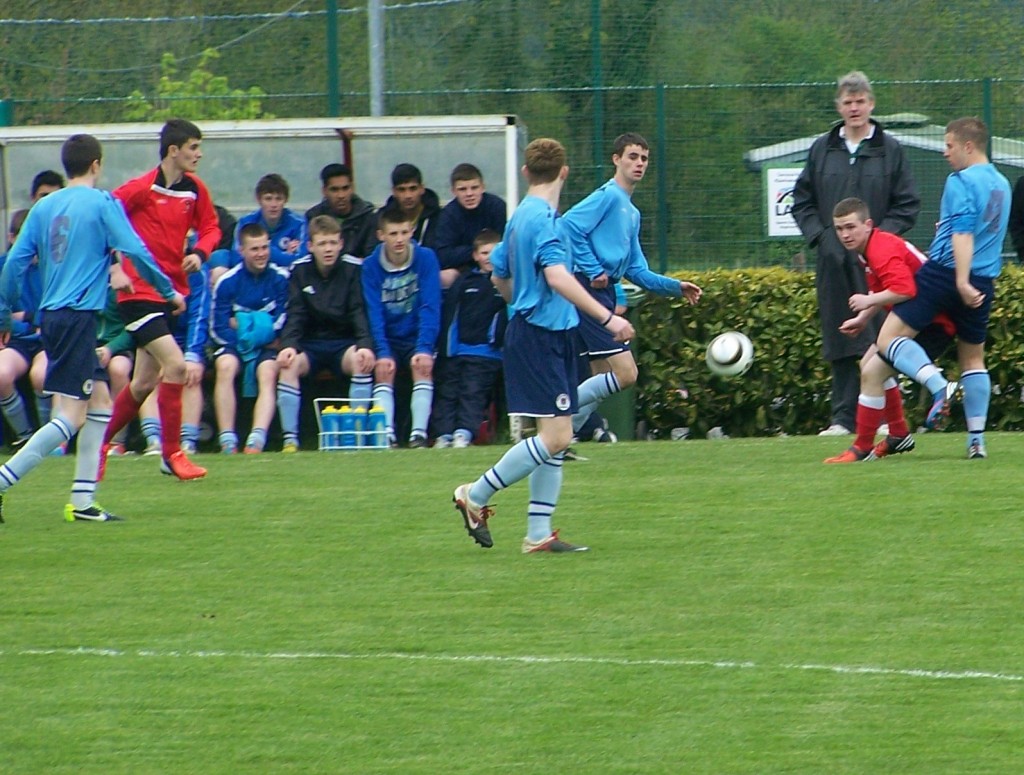 Nenagh AFC signalled their intent from the kick off and hit the front on four minutes when Luke Kennedy initiated the move on the right before Dylan Walsh whipped in to Danny Butler who prodded inside the post from outside the six yard box. The Blues should have doubled their tally three minutes later when Danny Butler’s shot caused problems for the Peake Villa’s goalkeeper, however Alan Sheehan’s follow through effort from close range lifted over the crossbar. It was all Nenagh during the early stages with Jordan O’Gorman and Danny Butler coming close to extending the lead. The TSDL side drew level on the fifteen minute mark when Billy McCarthy’s free kick saw Shane Dunne time his run to perfection before heading to the back of the net. Nenagh AFC stepped it up again and a Dylan Walsh shot from in front goal on seventeen minutes saw Seamie Hanafin clear under pressure and then the woodwork saved Peake Villa two minutes later after Luke Kennedy set up Ben Banaghan on the left, however the low pile driver ricocheted against the base of the post. Scoring chances for the Thurles side were limited throughout with Adam Gareth providing the main threat up front and the number 10 did well under pressure to lay back to Billy McCarthy, however the shot was over the top. Luke Kennedy’s strike from distance was on the mark midway through the half, however Seamie Hanafin did well to deflect the ball on to the crossbar. Peake Villa were failing to make any real inroads, although Adam Garreth was clean through on goal seventeen minutes before the break only to be pulled back for offside in what was a marginal call and then Brian Bourke got behind the Nenagh defence, however Cillian Fitzpatrick was able to gather. Nenagh took a 2-1 lead to the break after William Collins crossed from the right following a good approach play before Alan Sheehan swapped feet to drill a low effort between the posts. The opening minutes of the second half saw goal mouth action at both ends as Ben Banaghan linked up with Danny Butler, however the Peake Villa defence smothered the opportunity and then a counter attack saw Cillian Fitzpatrick advance to make a crucial body block outside the box. Nenagh AFC extended their lead to 3-1 on 51 minutes when Luke Kennedy side footed to Ben Banaghan who tapped home from close range. Luke Kennedy was then on the score sheet ten minutes later after getting the last touch on Danny Butler’s delivery to head home. The influential Luke Kennedy was in the action again on 68 minutes after advancing on the right to drill to the roof of the net with a well struck shot. The woodwork denied Danny Butler with eighteen minutes remaining when his shot thumped off the crossbar. Peake Villa kept battling despite the deficit as Shane Dunne latched on to Billy McCarthy’s free kick to head wide on 76 minutes. The TSDL side did pull it back to 5-2 seconds later when Adam Gareth charged down the Nenagh custodian’s clearance as the 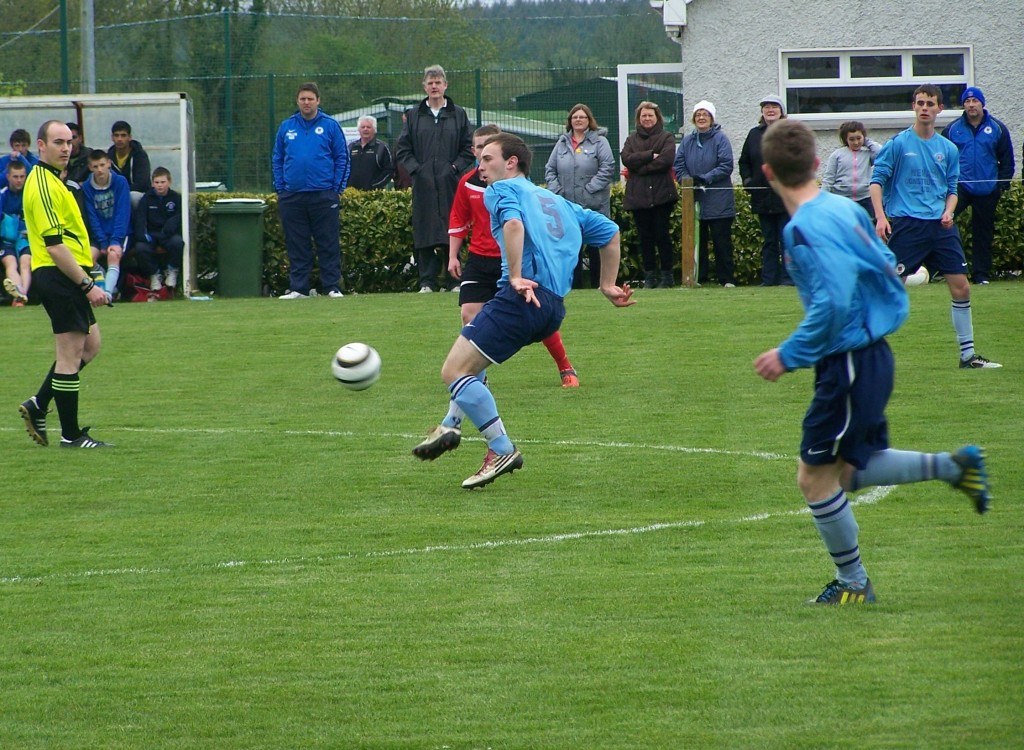 ball broke to Brian Bourke who finished to an empty net. Nenagh AFC blitzed the Thurles outfit in the remaining minutes as Danny Butler netted his second of the outing with a cracking long range effort that whizzed past William Tierney and then the Peake Villa shot stopper denied Luke Kennedy with a one handed save. The Nenagh lead was stretched to 7-2 on 82 minutes when Emmet Dwyer got on the end of Danny Butler’s corner kick to head home. Mattie Stakelum had the ball in the Nenagh net minutes later, however the effort was disallowed for offside. Luke Kennedy capped off a man of the match performance two minutes from time with a mazy run through the centre before picking his spot to complete his hat-trick with aplomb. Peake Villa will be disappointed with the final score line but can reflect on a successful season that yielded a League Title and 2 Cup Titles and will learn from their maiden appearance in a Joe Delaney Cup Final. Nenagh AFC were elated at the full time whistle after clinching a long overdue win for the NT&DL in this prestigious competition and completely overwhelmed Peake Villa on the day in what was a thrilling display from the Blues. The Joe Delaney Cup was presented by Mike Young (NT&DL Chairman) to Nenagh AFC captain Stephen Aherne after the game. The Nenagh Club will now look forward to the NT&DL Tipperary Cup Final next Friday evening where Nenagh AFC ‘A’ play Nenagh AFC ‘B’ with victorious Youths players in both squads so a novel Cup Final is in prospect. 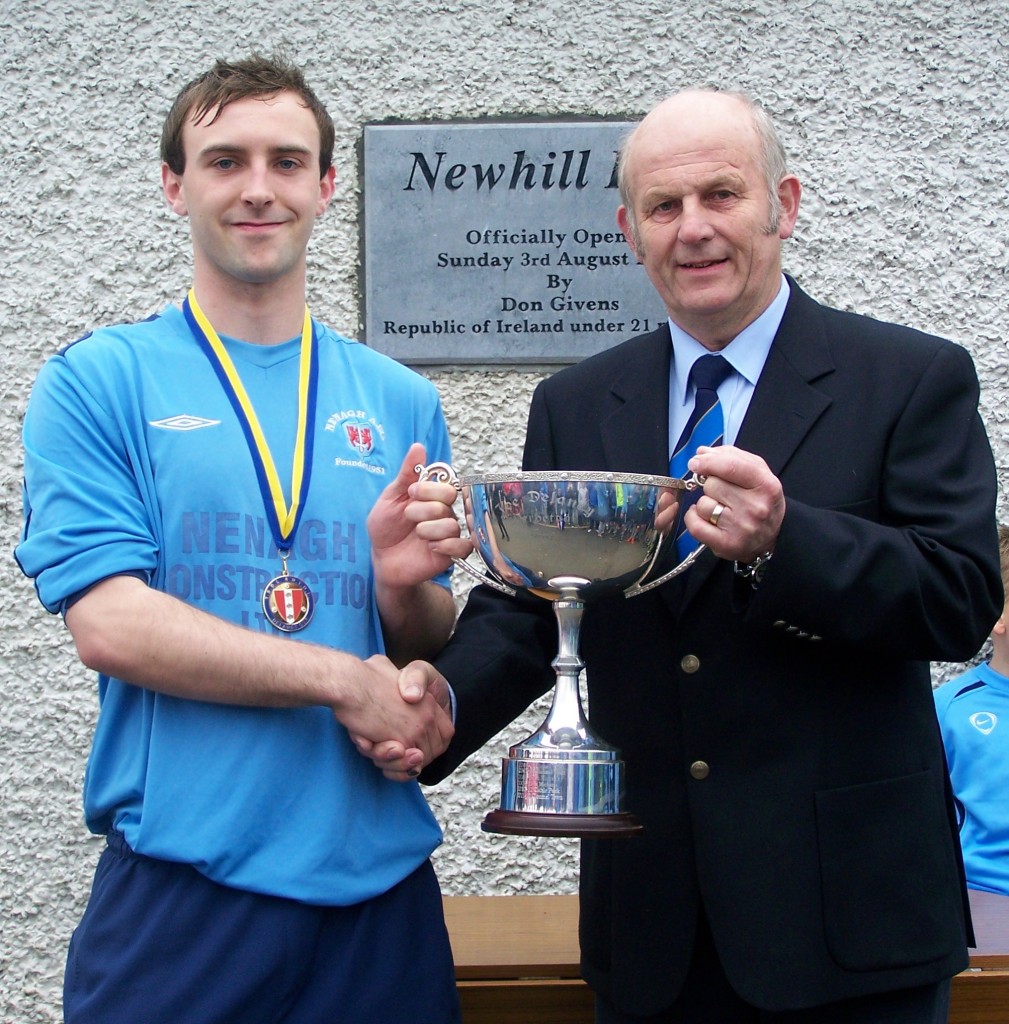 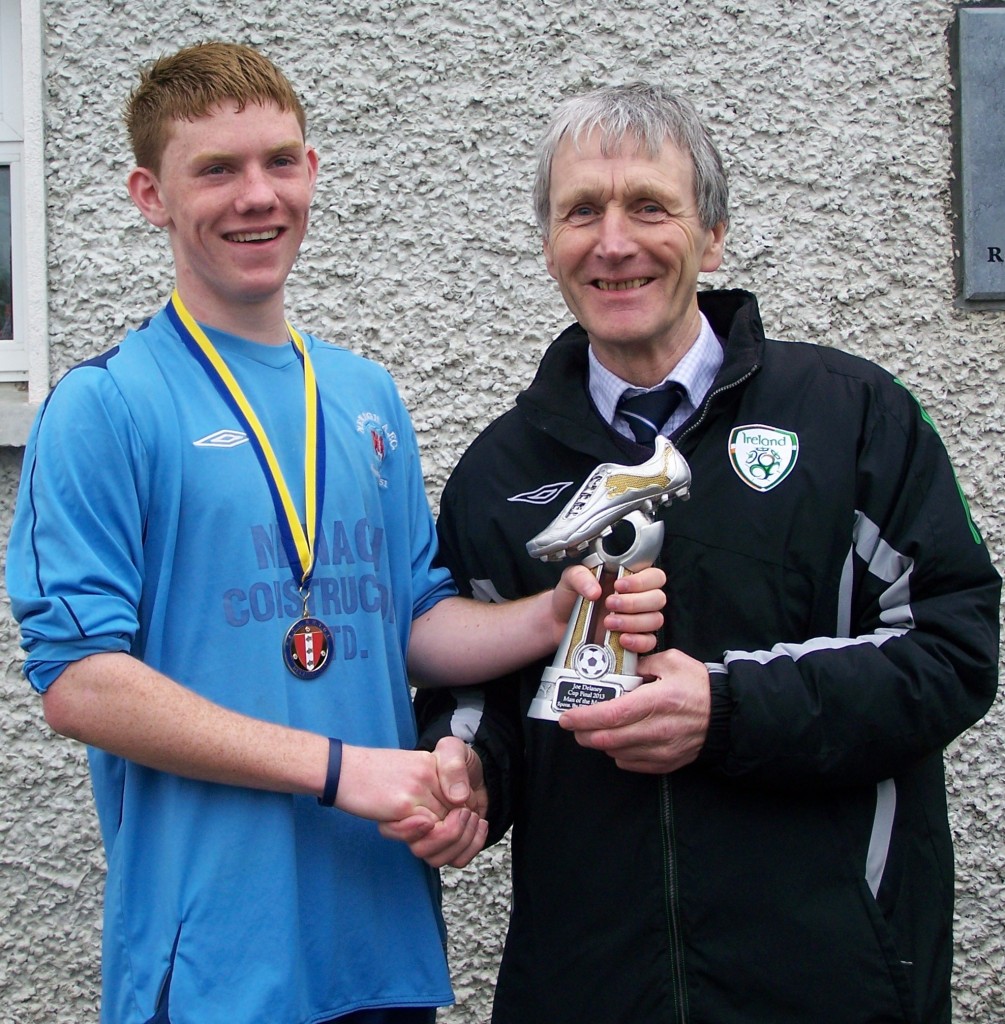 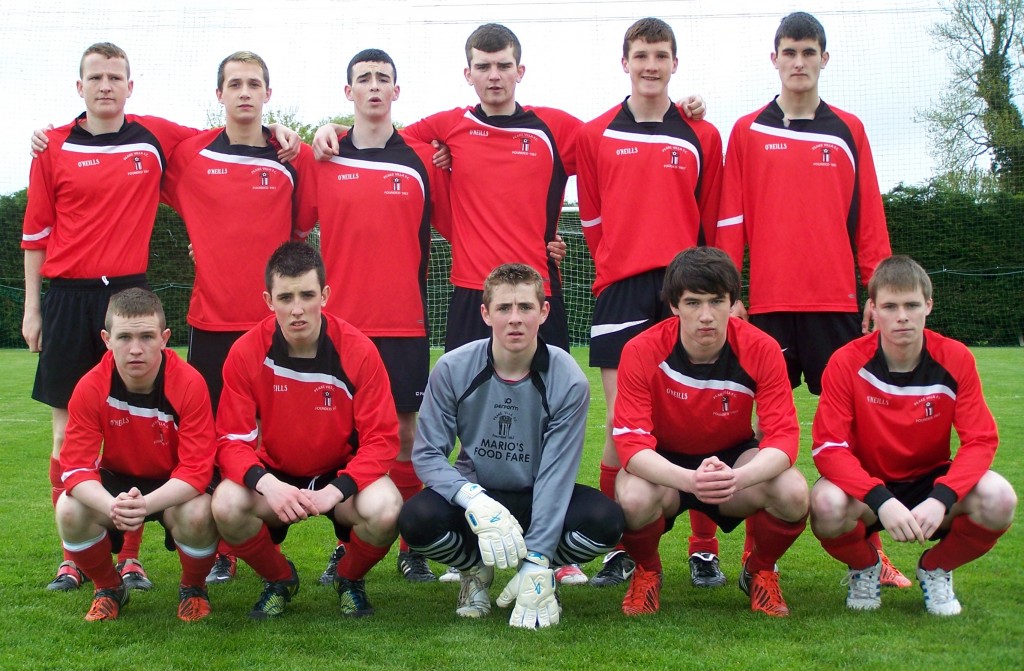 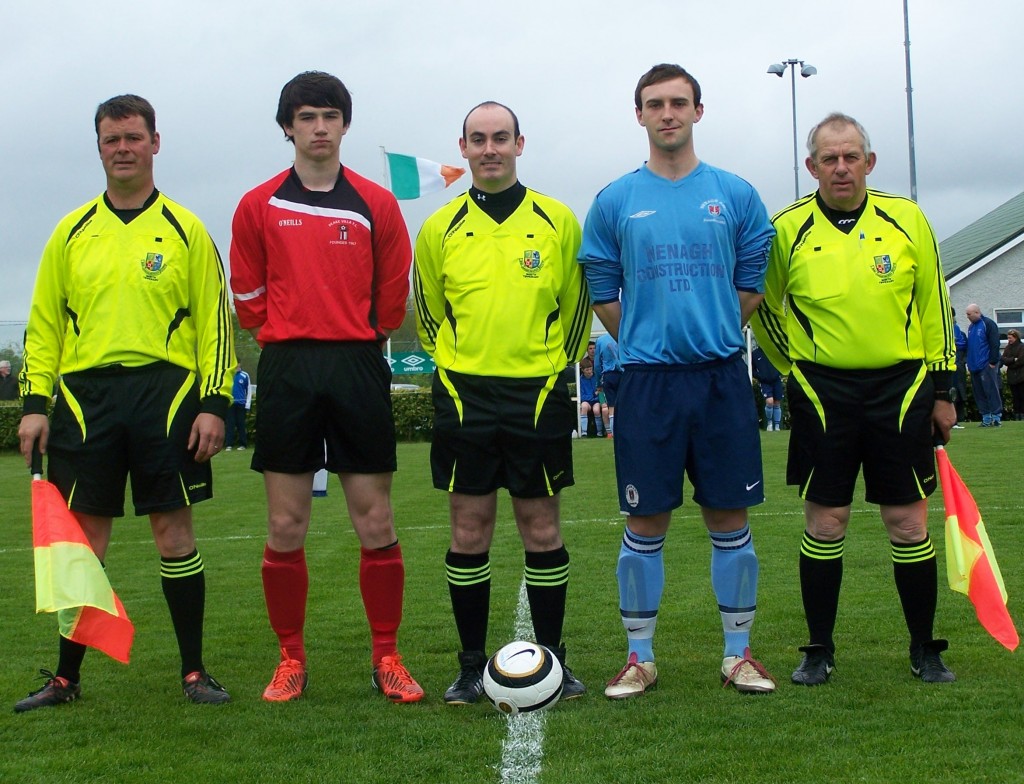